There wasn’t much to like about Sue Stein’s Mac-Groveland kitchen when she recruited Hoffman Weber to remodel the space.

It was small and cluttered with limited storage, little counter space, an unvented gas stove and no dishwasher. Worst of all, the refrigerator resided in a landing between the back door and the cellar stairs.

Sue recalls the old kitchen an embarrassment in her otherwise charming 1925 bungalow with its rich woodwork and period built-in hutch.

No wonder jaws dropped when neighbors and her Realtor friend, Sue Johnson, discovered how some outside-the-box design solutions overcame all of the shortcomings without even knocking down a wall.

Sue (Stein) and her partner Howie Bell worked with Hoffman’s Ken Nelson to give their kitchen a liberal makeover within a conservative budget. He made the most of every square inch to create a custom look and newfound functionality. 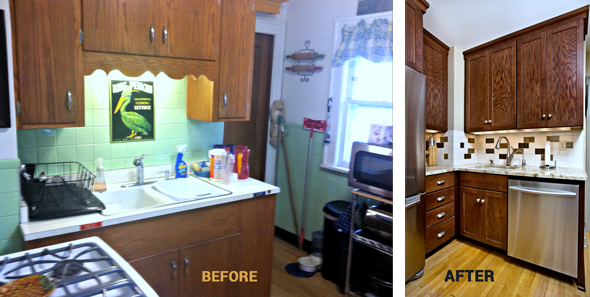 First, the cooking area moved from an inside corner by the sink to an outside corner where the new stove could be topped with a spacesaver microwave/hood that vented outdoors. That made way for a refrigerator to come in from the hall. Meanwhile, a deep, single-basin sink replaced the old double unit, which added precious counterspace and accommodated the new dishwasher.

Work surfaces literally doubled with the addition of a long tapered granite counter that extends over the old radiator. Rather replace the old window to eliminate its counter conflict, Ken raised the inside sill and shortened the sash without disturbing the exterior stucco, framework or combination window. Then he finished the radiator with a custom screen that matches the cabinetry.

With his clever approach to keeping the old radiator, Ken saved sue the cost of tearing up the original maple floor to install in-floor heat. Instead, they merely refinished the surface. 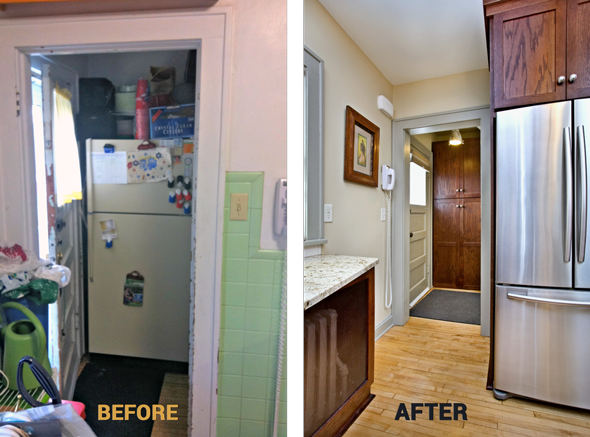 The new, dark oak cabinetry now matches the original woodwork in the other parts of the house. With soffits removed, the cabinets now extend to the ceiling for maximum storage. They also feature an accessible lazy susan in the corner and narrow cabinets for spices and trays. And a new floor to ceiling pantry cabinet provides even more storage out in the hall. Most important, oak end panels wrap the appliances for a truly built-in look.

Sue admits her initial budget assumptions were unrealistically low. But the retired St. Paul teacher credits Ken with helping her to make the most of her resources and to splurge where it would do the most good, such as the granite, pantry cabinet, lazy susans and moldings.

Choosing the granite was especially fun, Sue recalled. “Ken drove us up to a quarry near St. Cloud to see the big slabs. We were budget conscious but the common slabs weren’t special. Being at the quarry, we were able to see more freeform patterns.

It cost more, but we decided we wanted to go with step-up stone because Ken said it was going to have a big impact on how the kitchen looked. We are just thrilled with the stone, and it means more to us because we picked it out."

Although she remodeled the kitchen for her own benefit, Sue is pleased her Realtor friend thinks it will enhance the home’s appeal and value tremendously if she decides to sell someday. Now that she has her Hoffman Weber kitchen, she admits it will be even harder to move.

“We wanted the conveniences and features of a modern kitchen but have it look like it belonged in an older bungalow. We could not be happier with the results. It’s absolutely incredible,” Sue said.

See more of this kitchen project...